Since the launch in 2003, the EDIDA awards have been the most recognized international design event to celebrate the top designs and designers of the year. This year is no exception.

The winners were photographed in Bologna, Italy, at the Replica of Le Corbusier’s Pavillon de l'Esprit Nouveau.

A career can be driven by the awards that one receives along the way. But these awards do not seem to distract the forty-year-old German designer, who has been ploughing his own furrow since 2006, despite the emotions underlying his research. Objects, lamps, and furnishings. Décor and interiors. With his senses awakened, he pursues “quality, honesty and sustainability”. A triad he translates each time into a new project, which Sebastian himself mentions. Either collaborating with the most acclaimed companies or alongside the artisans he came across around the world, from Colombia to Taiwan, the strength of his work has been boosted by his curiosity towards materials, techniques, and technology. He is a child of his time and experimentation is his distinctive trait. The result is always controlled and measured, rooted in tradition and in dialogue with Masters’ works, yet stunningly inventive. Whether it is an unusual combination of colours or the reinterpretation of shapes, the aesthetic gradient becomes an autonomous and modern interpretation of functionality. Perhaps this happens because his focus is on people, the environment and space. On variability. On the possible connections with an objects’ value and with the values that they can, and must, convey. Responsibility, culture and vision are in fact the other recurring words in his vocabulary. This new award may well please him, but we assume that it will just be a small step further into his personal investigation of the world. And also for him to be a little closer to us, who value his work. 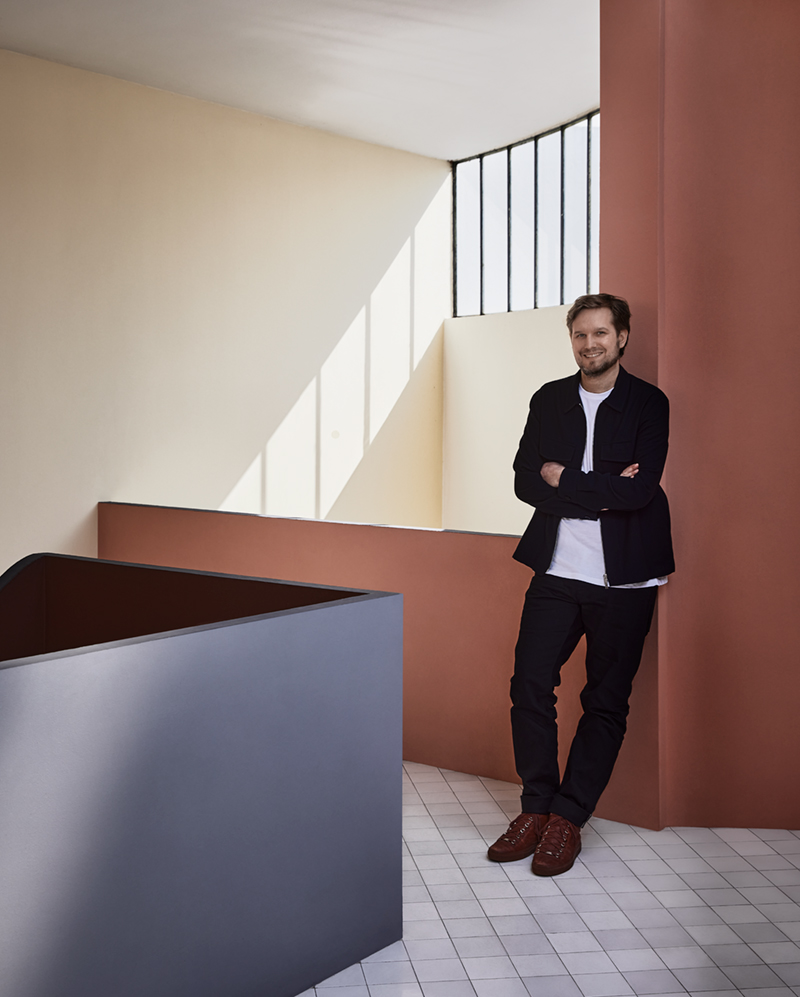 YOUNG DESIGN TALENT OF THE YEAR /

A young woman in her thirties who graduated (with honours) from the IED in Milan and runs a studio founded in 2015, which is already well-established in the capital of design: Federica is a fully-fledged spokesperson of the Italian nouvelle vague, as well as one of the most internationally recognised people. We like the industrial dimension of her work, which she has been exploring since her school years, in the fertile terrain of Made in Italy. The Livre armchair for Gallotti&Radice, one of this year’s projects, dives into the roundness that she always favours as a creative option. Her touch is soft and delicate, always imitable on a large scale, as the discipline teaches. Without giving in to the lure of limited editions, she does not renounce a certain decorative sophistication, well expressed in the Hinoki screen for Manerba. What attracts her is a love for big numbers, a challenge she recently faced: the Lume cup for Nespresso combines material and formal research with an irresistible touch. Always organic and natural, hers is a true trademark, simply due to its spontaneity: millennial proof. 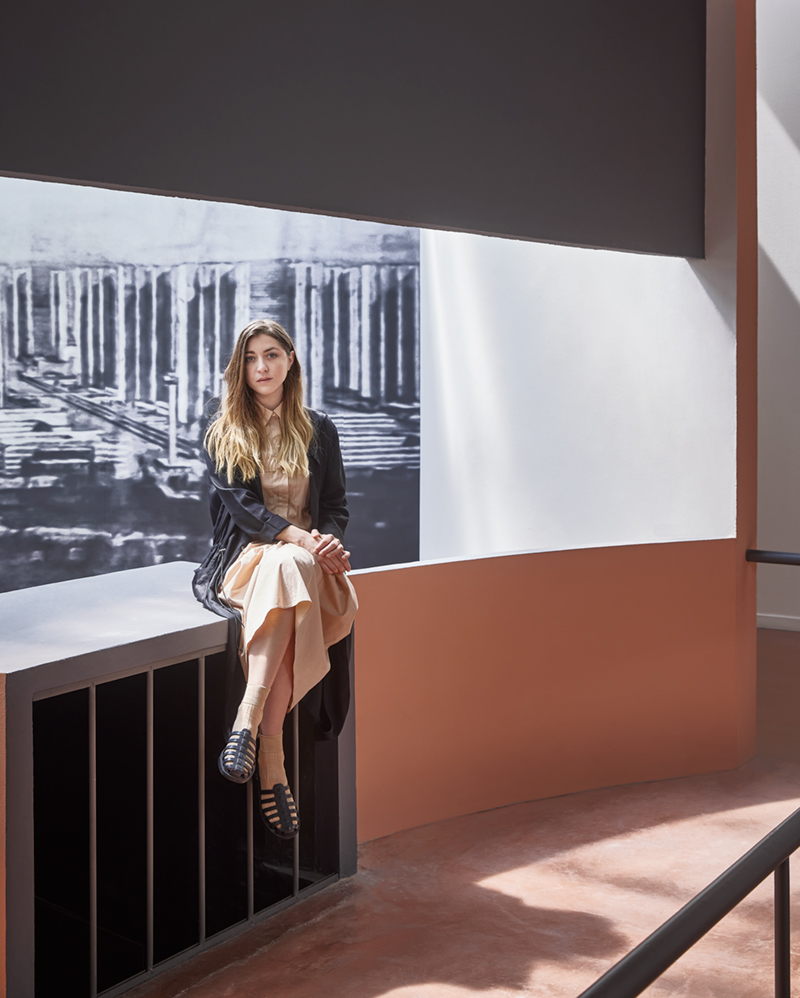 INTERIOR DESIGNER OF THE YEAR/

He can easily work at different scales, from design to architecture, but it is in the interiors that his creative nature is characterized: aesthetic, functional, and artistic. “Time, memory, surfaces, signs, and imperfections fuse into a single voice: my work thrives on all of this. Sensations that lead me to explore new expressions, in a path whose finish line is experimentation, my only goal, the foundation of every project”, he says. Whether it is a house, a store, or a yacht, his instinct causes him to create a complete project. Precious materials - such as marble, stone, polished steel and brass, rough and industrial materials - such as concrete, resins and fiberglass, or impalpable and natural materials - such as velvet and linen, take on a new character, unique identity, and distinctive feature. From design projects permeated with sensuality, in which he plays with sculptural forms and evocative power, exhibited at the Carpenters Workshop Gallery and in his studio in Milan, to the project for the villa in the outskirts of Milan (Elle Decor Italia 12-1/2021), and the interiors of the Magellano 25 Metri, a yacht designed for Azimut, the spaces that Vincenzo De Cotiis invites us to experience are defined in detail. Where each small component, from the design of a lamp to the choice of furnishings and artworks, to the study of the light reflected on surfaces and the rooms’ proportions, is part of an all-round intervention. Whose soul is unquestionably De Cotiis’. 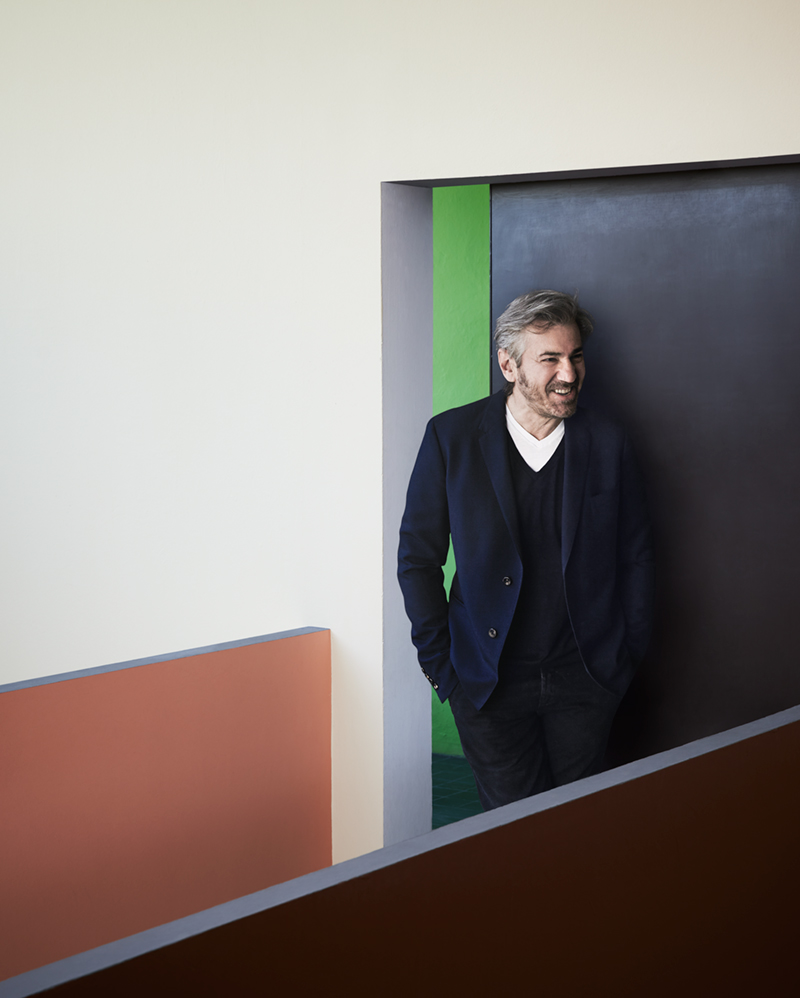 BORGHI by GUMDESIGN for ANTONIO LUPI

Material research and Italian tradition comprise this line of freestanding washbasins. The peculiar element is the cork base, natural or toasted, which supports basins made of Cristalmood, a transparent resin patented by the brand. The line is signed by the Tuscan Gumdesign, that is, Laura Fiaschi and Gabriele Pardi, who were inspired by Bolgheri, the charming town in Maremma, while creating the Gran Cru, Oleo and Ceruleo nuances that recall the colours of olive trees, wine and sea. 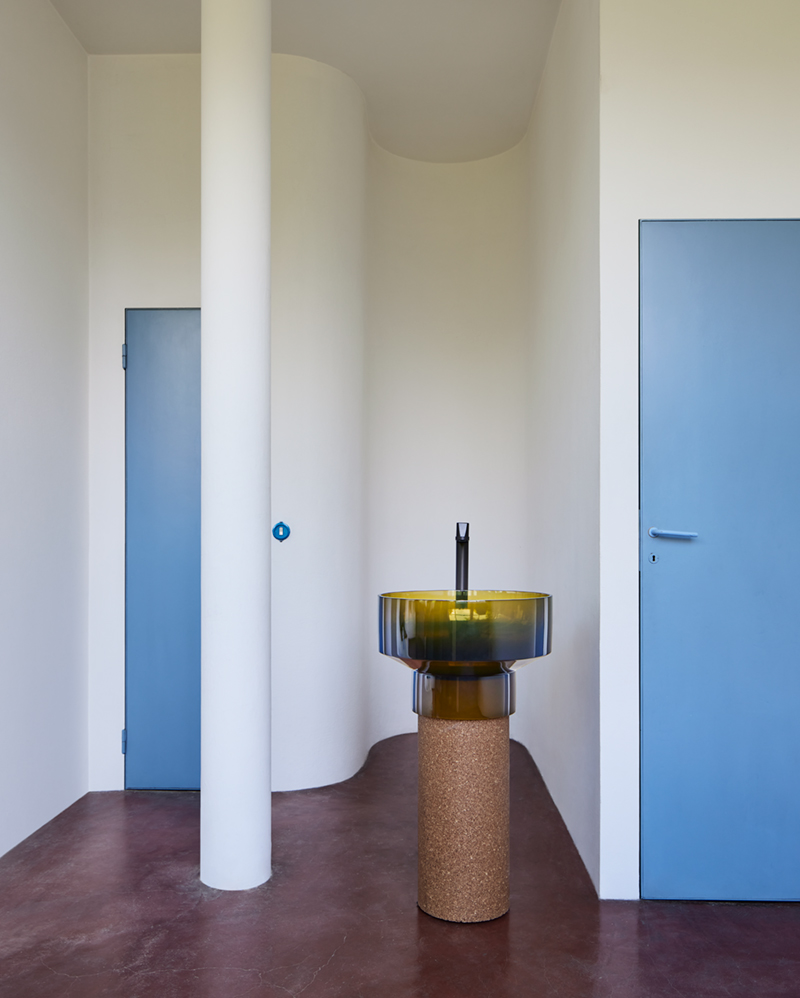 STONE by FEDERICO PERI for BAXTER

The rounded profiles of the headboard intentionally recall well-polished stones. The whole profile seems to evoke a natural landscape to favour a peaceful rest. In particular, this is apparent in the modular version which makes it possible to add two side panels in which to integrate three different bedside table models of choice: with or without drawers, and with lighting hidden in the brass bar. The sensual tactility of the upholstery leather, together with the thin forged metal of the load-bearing elements, highlights a project revolving around balance and asymmetry. 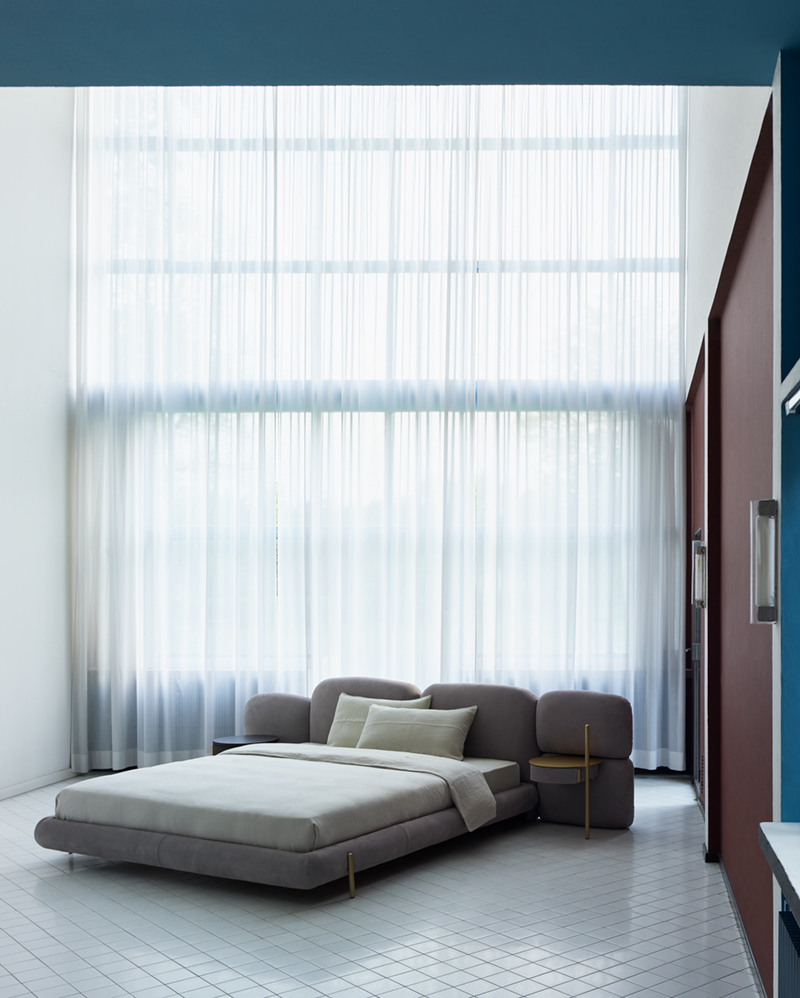 Four models for two textures, two prints, and eleven overall colours. A collection that modulates scales, nuances, and motifs to be combined in contrast or in chromatic nuances and graphic rhythm. It updates, with the usual craftsmanship of the brand, architectural styles from different eras and latitudes. Minute drawings with a European modernist imprint and graceful scrolls typical of Malian mosques, geometries from English topiary art, and Georgian wrought iron façades: there are many references, adding a nostalgic but daring touch to each inspiration. 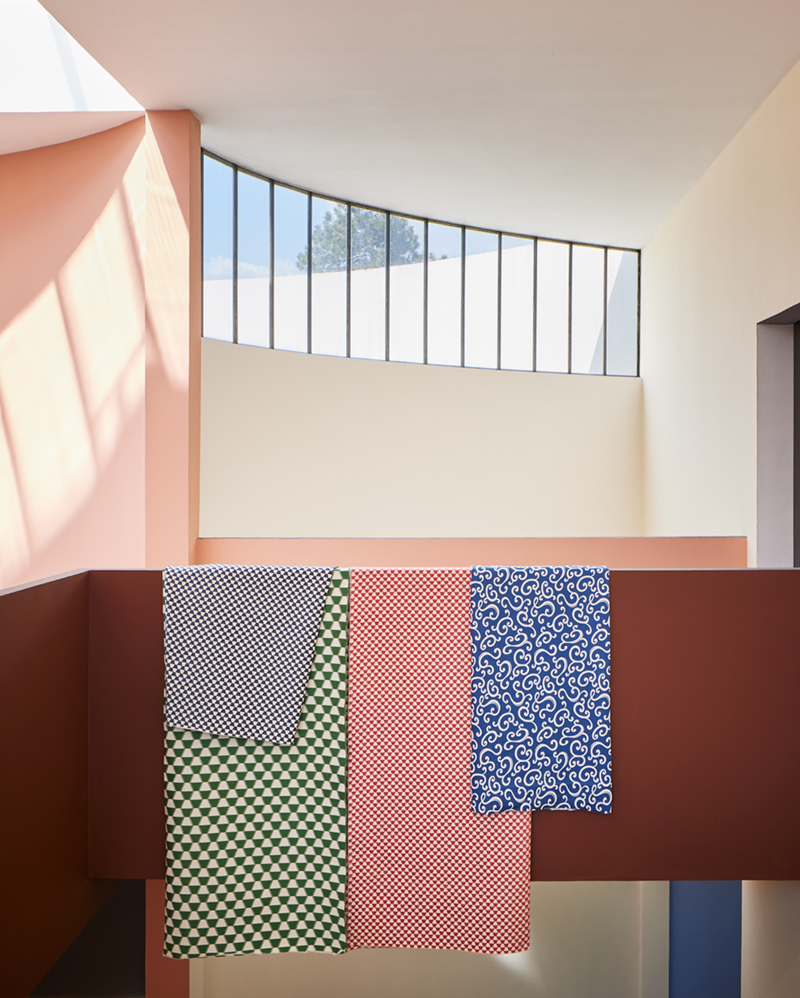 ZENEN by LIN YUMING for NANCHOW

This is crafty: what looks like a carpet is actually a series of hand-made concrete tiles. The straight and circular lines create a single pattern, variable in colours but not in definition. The design is rooted in the oriental Zen philosophy, which longs to capture the sense of the space-time relationship in tangible, complete signs. It is a new abstract alphabet of decoration that elaborates unprecedented visual references, full of familiar allusions and meanings. The Zenen cement tiles, part of the Walkpaper Collection, lend themselves to spread natural interpretations intended to define places with a new atmosphere. 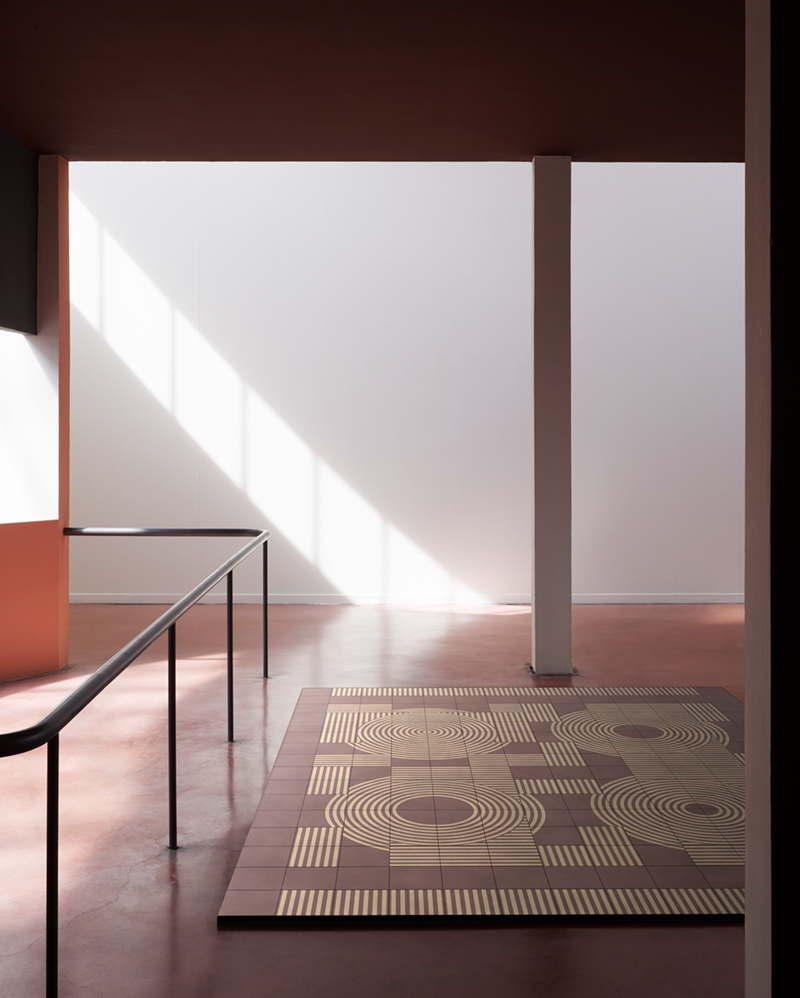 The table’s architecture is at the centre of this singlematerial object created by the famous French designer. Inspired by the trilite system, versatile in its design, conceived for home and contract, it stands out for the geometric rigor of the profiles and essential volumes. Matte or glossy lacquered, available in the material variants made of stone or reconstructed black Ebano and Carrara marble, it is characterised by the dialectic between heavy and light, full and empty. The thin top, in the oval or round version, seems to float above the base formed by two sculptural elements. 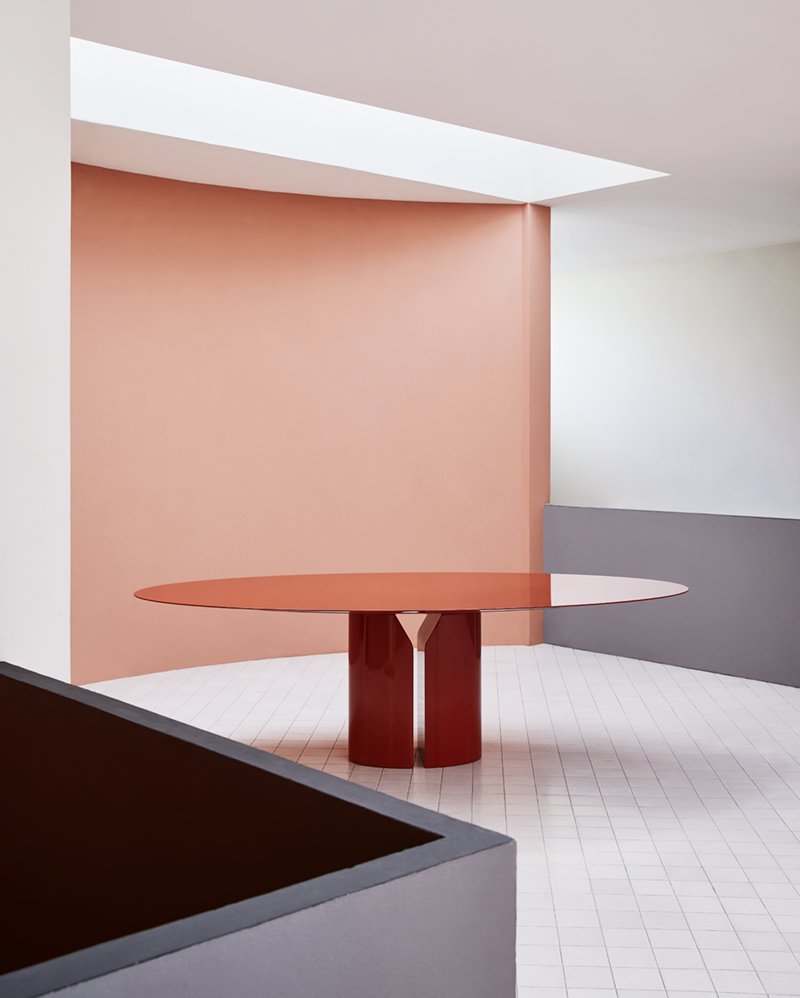 A strong and expressive character and refined details highlight the latest project signed by Vincent Van Duysen for Dada/Molteni & C. For Intersection, the Belgian designer is inspired by the works of Piet Mondrian and Carlo Scarpa. The kitchen system has intertwined surfaces with intersecting cast lights and shadows. The worktops made of Breccia Capraia, a natural stone, have solid and relevant thickness, with customisable sections or chiselled as sculptures. The doors are embellished by geometric inlays and lacquered surfaces. The snack top is spectacular, defined by soft lines and supported by a pillar base. The top is characterised by the wood grain and a sensual touch. Suspended, the equipped shelves are designed for various functions and accommodate the hood.

The Japanese word Bonbori indicates the traditional paper lantern used as a luminary for the rice harvest festivals and replicates the soft light coming from the inside of a snowy cave. Magical and festive, the soft luminescence of the lamp captures both atmospheres. It combines the preciousness of blown glass with a simple perforated metal base. Each piece is handcrafted and perfected. The special electrical connection makes it movable, thus suitable for the outdoors. A novelty for the collections of the Czech brand. 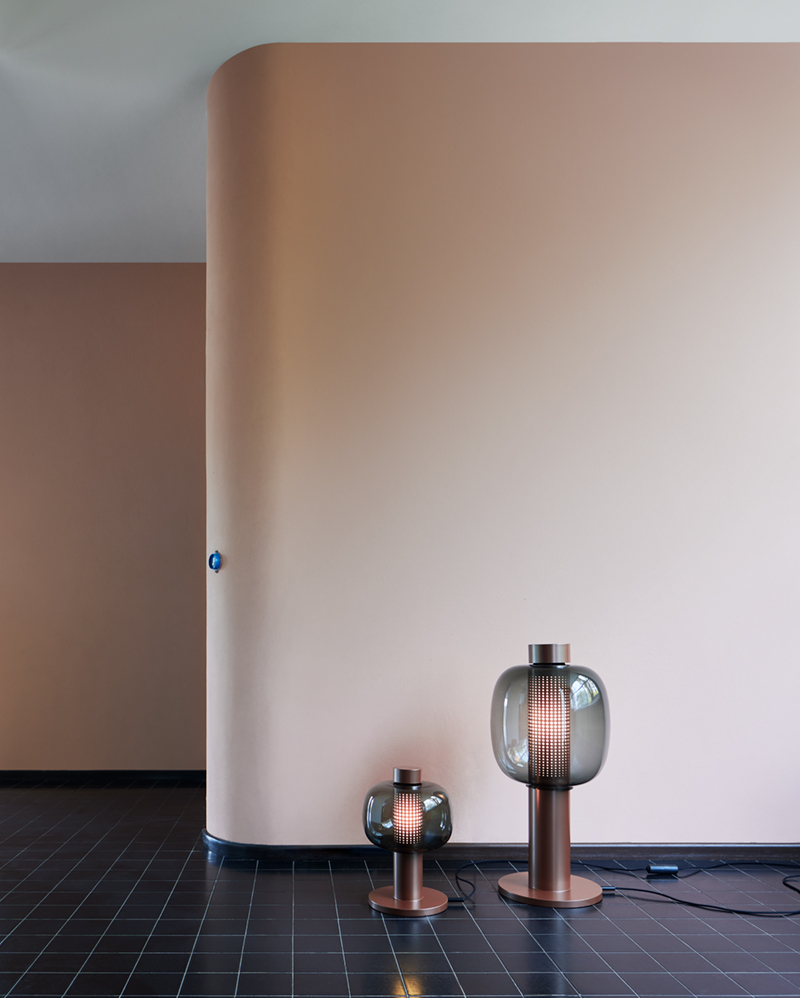 2.7 kilos of plastic. It is about half the rate of any one-piece plastic chair. But for Bell, a patented polypropylene was developed, made of production waste from the Venetian brand and from a car company in the area. And in turn it is 100% recyclable. A different industrial approach that transforms waste into a sustainable material, even in terms of how we understand the object. The conception of the design went hand in hand, since it makes the most of the shape to create the armrests around two holes, used for inserting the legs so that the chair can be stacked. 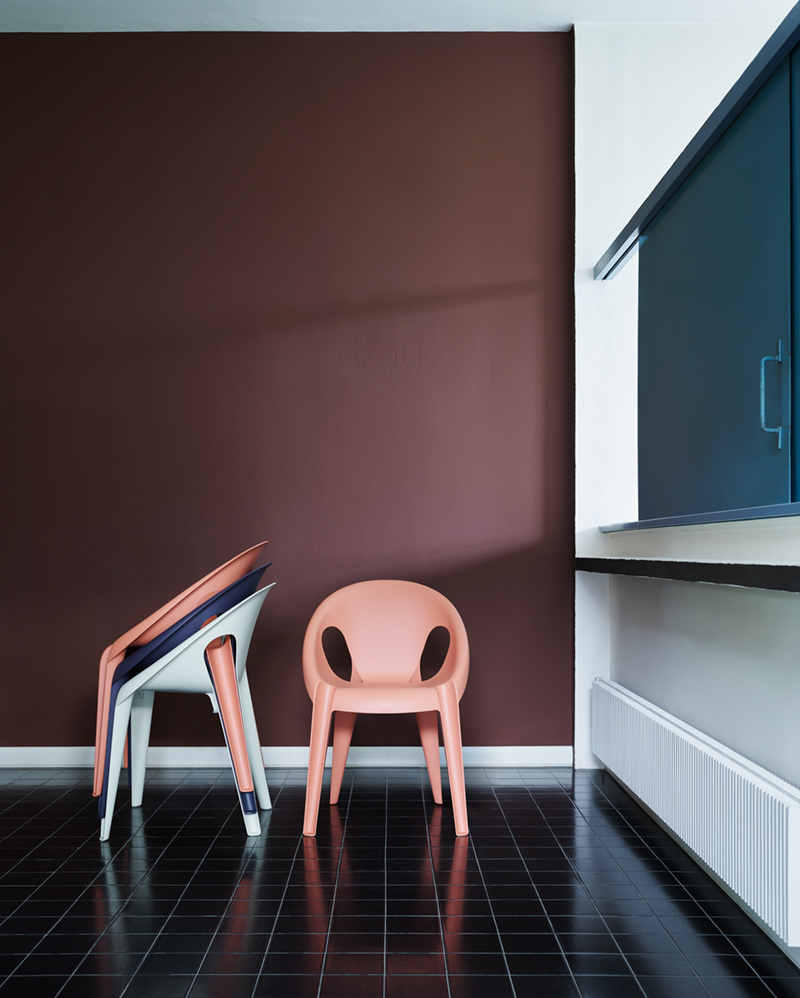 The open hand, which evokes a message of peace, for the square tray with rounded edges. The fish symbol on the round one. You can see the motion of the sun in the rectangular tray. Imprinted in a collection of pure unglazed ceramic, the bas-reliefs, an unmistakable touch by Le Corbusier, leave the béton brut to carry the language of the buildings by Chandigarh and the Unité d’Habitation of Marseille everywhere. A tribute to the Master, but above all to the utopian message that his work conveys, to be reiterated to humanity. 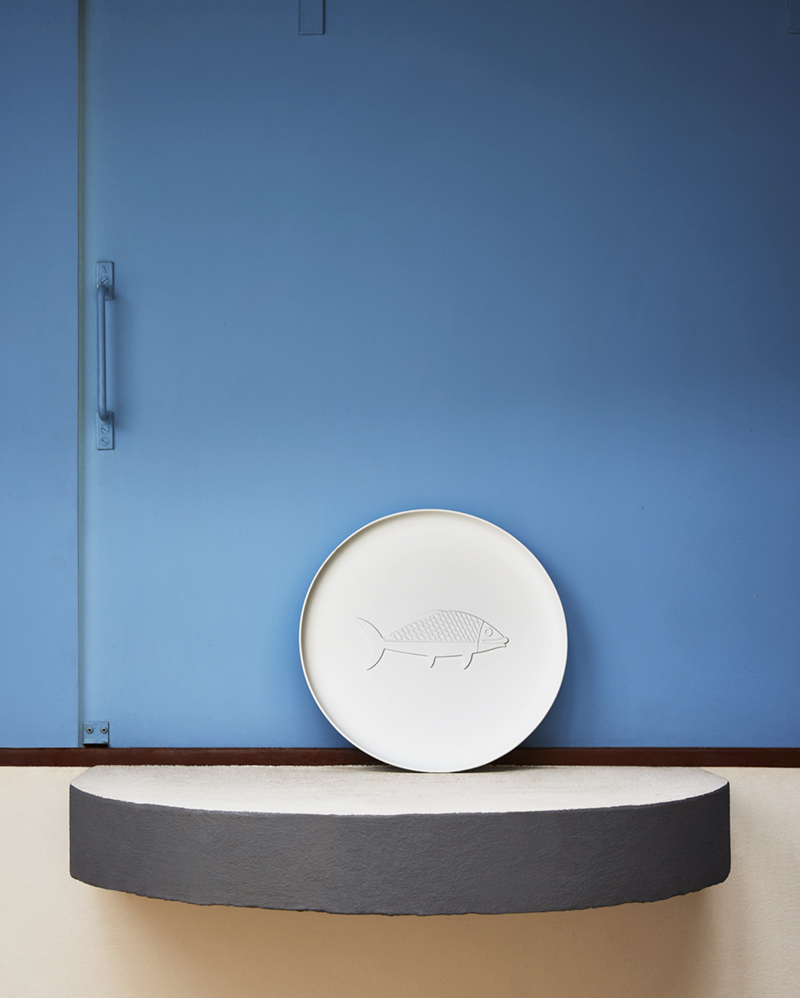 Inspiration can be found everywhere. For example, in plants, flowers and seeds of the Breton Belle-Île, which have become spontaneous subjects for small watercolour paintings. But then, through the combination of professional skills with a printing process incorporating a hand-applied metal leaf, they have also become wallpaper decorations. Like a bespoke fresco mural to be reproduced on surfaces. Surprisingly, the author is a designer known for her work in the field of lighting. A transgression, due to an unexpected design evolution. 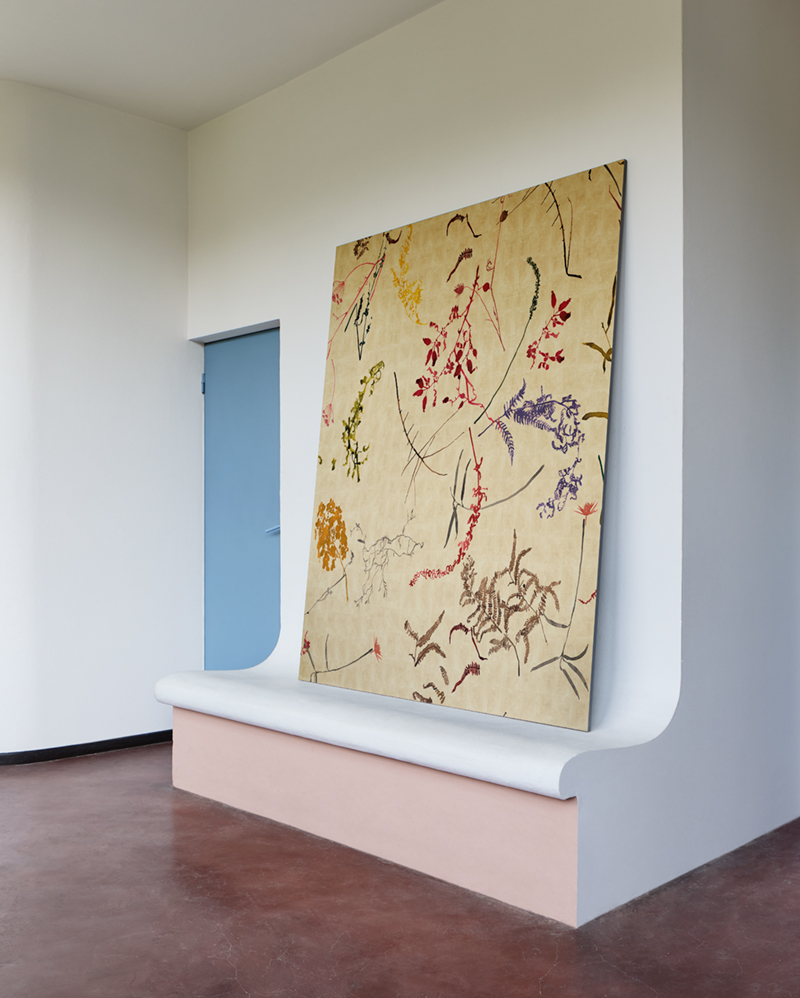 HUT by MARCO LAVIT for ETHIMO

What is fascinating about this project is its change of scale: much more than an outdoor furnishing, Hut is a type of en-plein-air microarchitecture which moves lightly in public and private spaces. More than its volume, designed to define a minimal, intimate and comfortable space, the elegance of the structure is striking. It is an almost aerial frame, made of wooden slats that brings us back to certain experiments by the young Italian designer based in Paris: minimal housing units, as delicate as nests, which can hide in tree branches or float on the surface of the water. A fortunate change of scale, especially in post-pandemic times, which will force us to keep our distance, again. 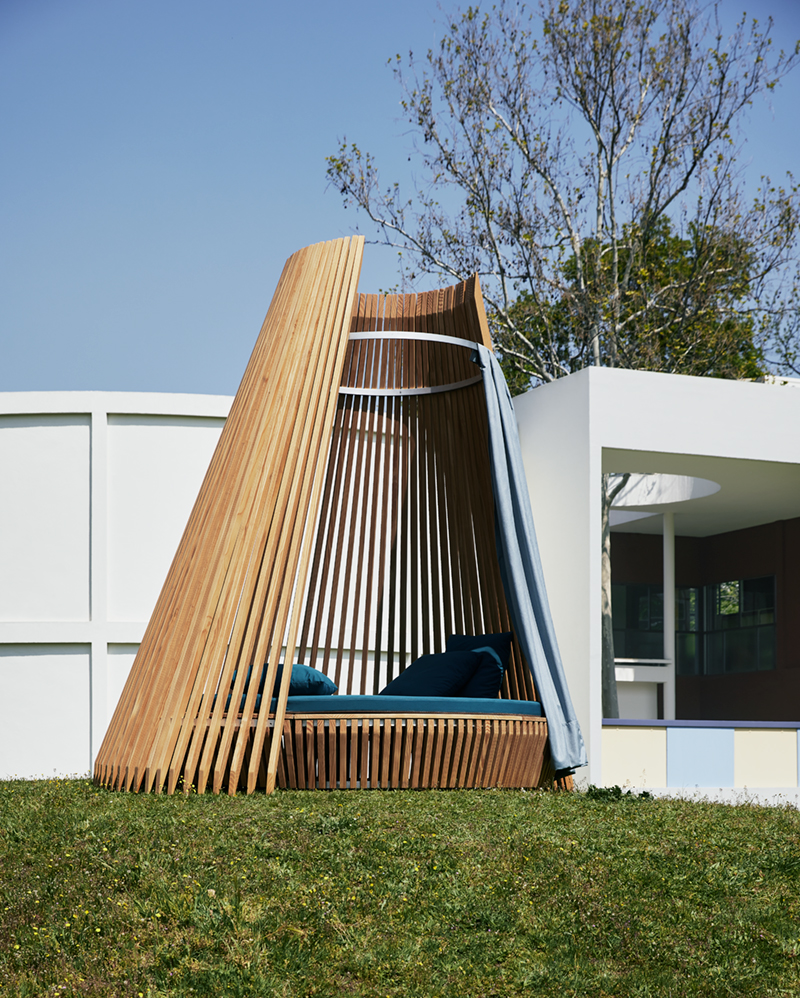 Thank you again to the Fondation Le Corbusier.