Since 2003, the EDIDA awards have become an unmissable event for the interior design world. Some of the world’s most renowned designers have previously received EDIDA awards, and this year is no exception with an additional award – interior designer of the year

An engineer with a passion for speculative design. Or rather for that type of research that remains in the world of the possible without ever becoming a reality that fuelled his production during the years he spent studying at the Royal College of Art in London. And it was, in fact, his desire to stem the imaginative strength of his creativity that led designer Michael Anastassiades, born and raised in Cyprus, to the world of lighting. In 2007 he established his own brand and began producing sculptural luminous structures: real objects, with an apparently precarious equilibrium, that obliged him to keep his feet (and mind) firmly on the ground. This year he has won the award for Designer of the Year for his ability to effortlessly operate in all the fields of design, from furniture to lighting. His style becomes simpler with every challenge he faces, proceeding by subtraction to give way to the expressive strength of emotion. His pieces are self-descriptive: pure, honest geometric shapes. — michaelanastassiades.com 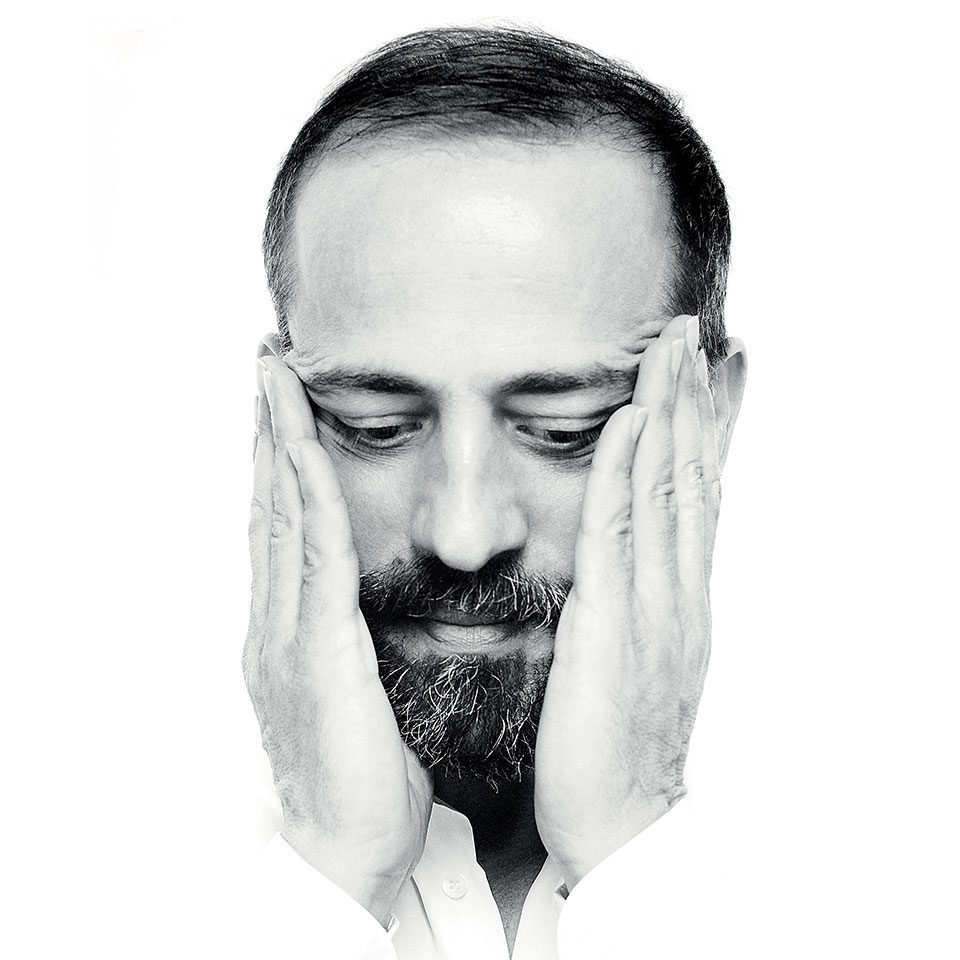 Sabine Marcelis, Dutch, was born in 1985 and recently lived in New Zealand, a land she left to return to Europe, where she attended the Design Academy in Eindhoven. Here she learned to explore the world of the impalpable and give shape to the imperceptible. Playing around with transparencies and chromatic rainbows, before long, she became a star of the international lighting scene. Her pieces consist of pure geometric elements that exist by interacting with the material, always a fundamental element for the development of her creative process. Glass and resin form transparent surfaces that float in the air and enable her to transform static into dynamic. In the hands of the designer, a new alchemist, luminous bodies are stripped of their weight and overcome the force of gravity. In a nutshell, she fascinates and amazes with the magic of simplicity. — sabinemarcelis.com 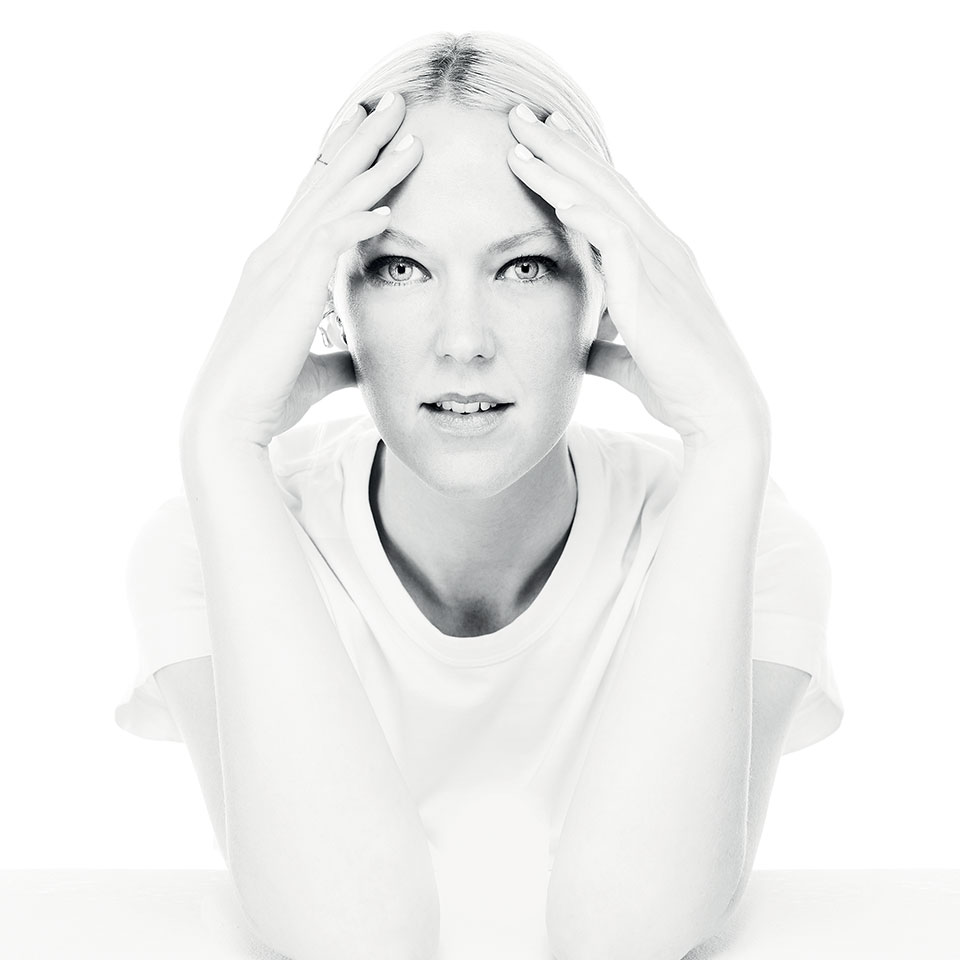 INTERIOR DESIGNER OF THE YEAR /

Of all the most influential creative minds that play a part in the culture of contemporary design, she stands out for her ability to produce bold, stylish interiors. Aesthetically untouchable, her vision of space is driven by three-dimensionality that challenges tradition with perplexing color and texture combinations. An architect by trade and cosmopolitan by nature, today she lives and works in Paris, having traveled extensively and set up home at all latitudes. The pop culture of 1960s America is the element that has had the biggest influence on her work: at times her interiors give the impression of the kaleidoscopic technicolor world of cartoons. When she was little she wanted to be a filmmaker, now she is an educator: her atmospheres, as in the set of a film by Almodovar, Kubrick or Fellini, are immersive environments to be explored through touch. — india-mahdavi.com 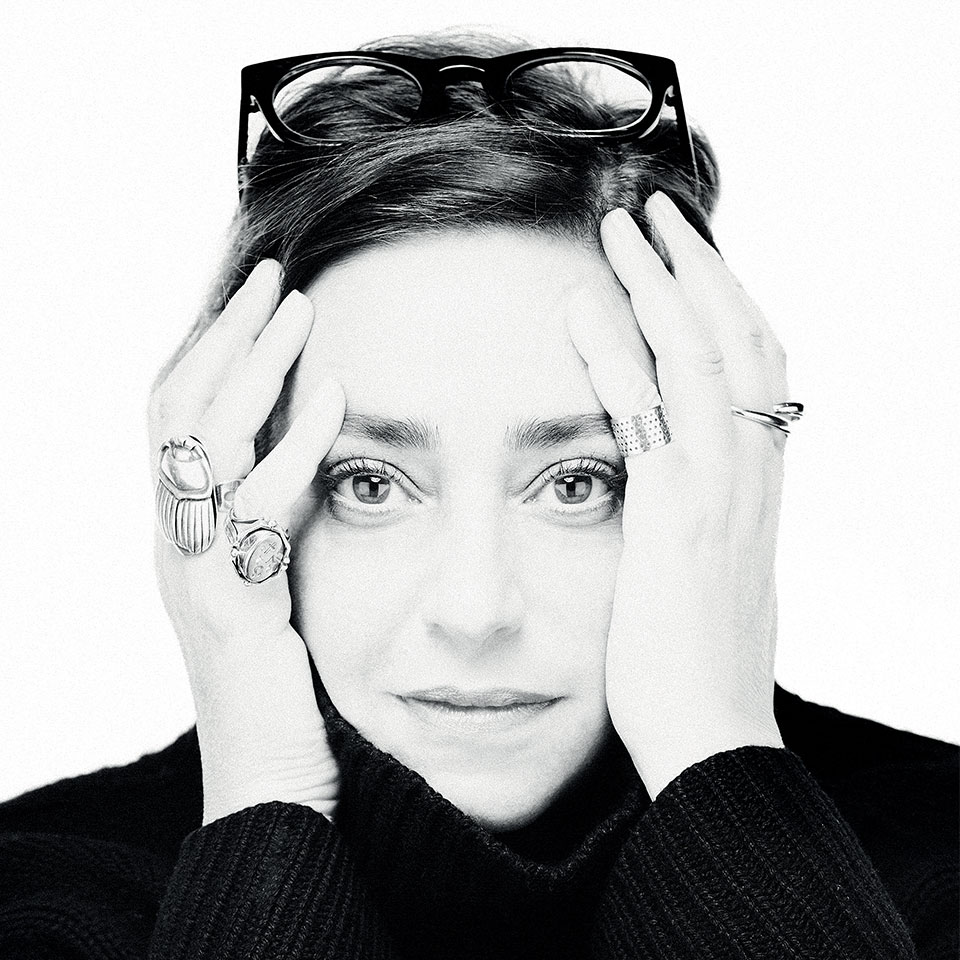 The gift of the Bouroullec brothers is nothing but a small wonder: they use it to transform shadows and transparencies into lightweight, textured partitions. True design elements that abandon the world of the imagination to cut and outline the spaces they inhabit. Rayures is a collection of screens made of hinged panels. It features neutral, translucent finishes and, juxtaposed to create striking domestic landscapes, the items serve as compositional partitions, separating and producing islands of intimacy. Made of tempered and colored stratified flutes glass, they come in large sizes that seem to challenge the force of gravity. — glasitalia.com 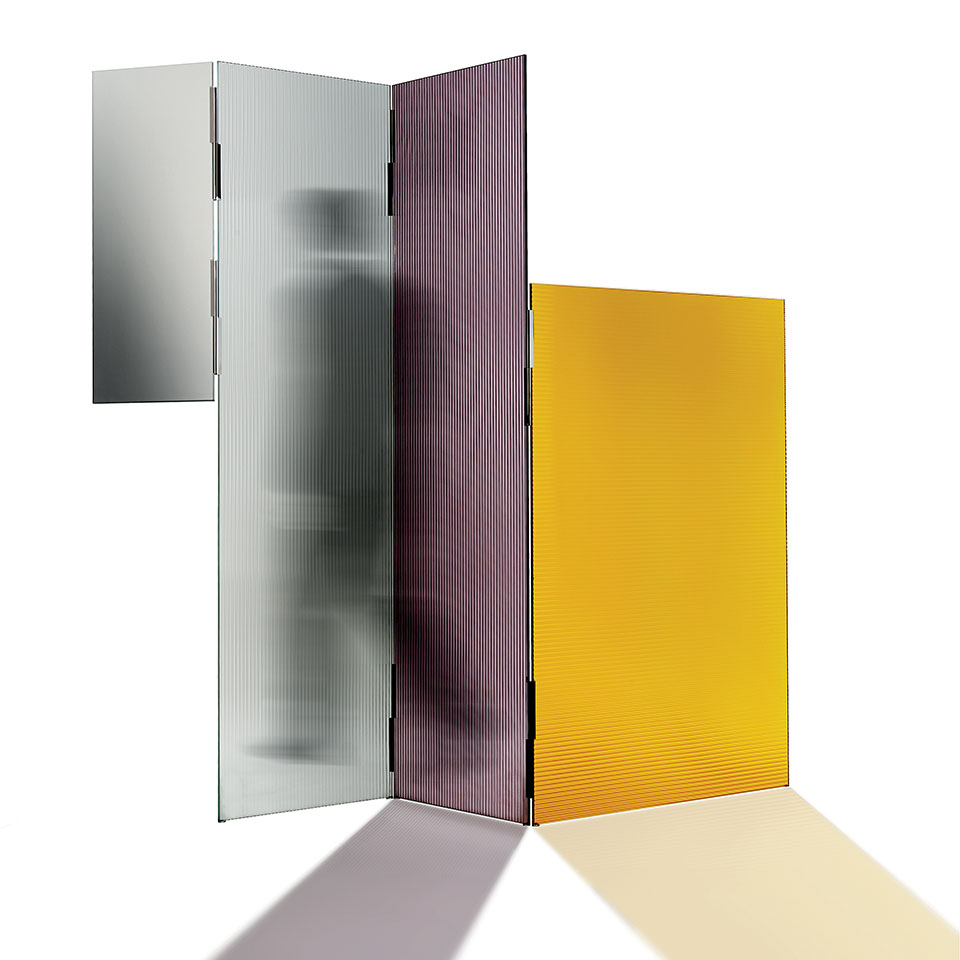 N01 by NENDO for FRITZ HANSEN

Many years later, in fact precisely 60 years since the master of design Arne Jacobsen created the Grand Prix in 1957, the Japanese studio captained by Oki Sato is bringing the historic Danish company back to solid wood. This process is much more than a simple attempt to fuse Nordic aesthetics with oriental stylistic purity: it provides a modern take on all of the brand’s artisan processing techniques. In addition to the formal elegance of an object that easily blends in with all home and contract environments, the armchair is also comprised of twenty-three wooden elements, meticulously assembled by hand. Available in black durmast, natural oak and beech, it is made with nine layers of veneers. Then there is the frame which, with its slight slope, embraces the body. — fritzhansen.com 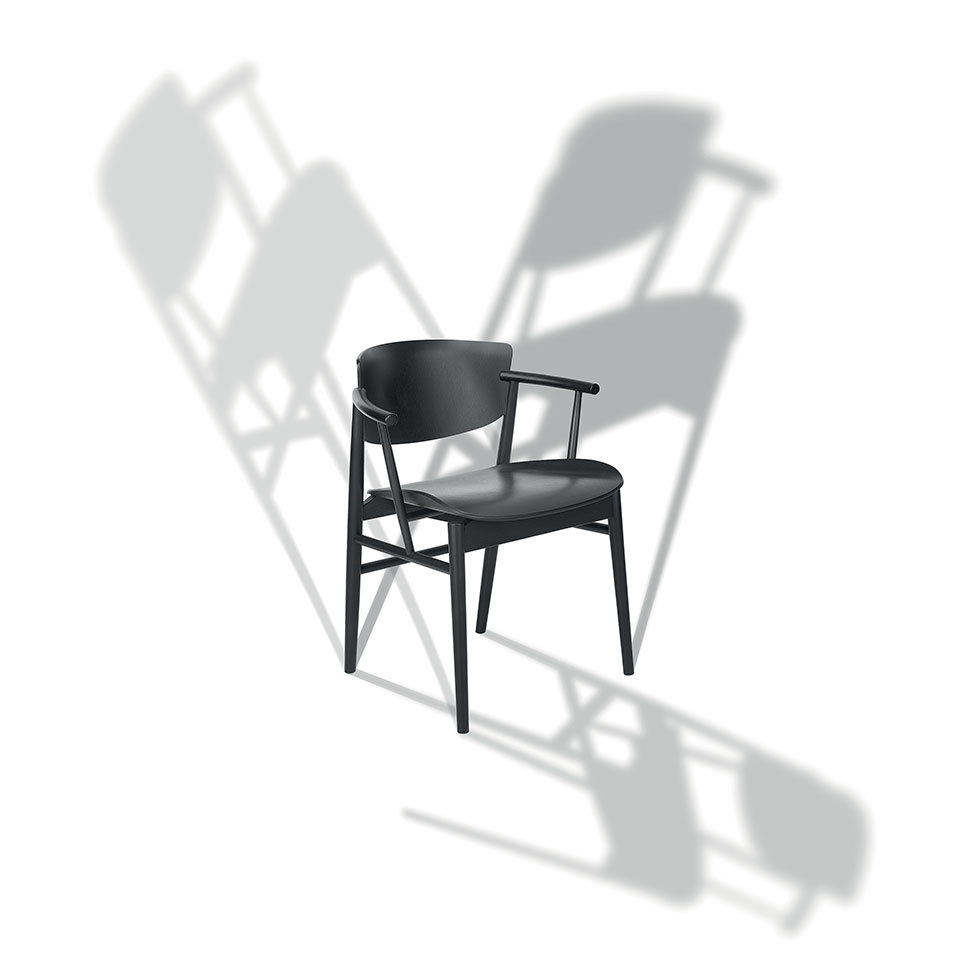 A 100% polyester fabric made by recycling plastic bottles and a pattern reminiscent of printing errors and ink stains produced by toners when about to run dry. The process in question is upcycling, which brings an abandoned object back to life, renewing and recovering it in a continuous virtuous cycle. An industrial product fuelled by the values of sustainability and respect for the environment, transforming the ideas provided by the waste material (sheets of paper) and creative inspiration (color) into production opportunities. “I often find myself thinking about how to interpret the theme of recycling and re-use in my work, in a way that allows me to assign a new value to something that was once considered waste. So I then looked around and translated the mess produced in my studio into a project”, states the Japanese graphic designer. And this was the spark that led to my collection of curtains, real contemporary canvases. — kinnasand.com 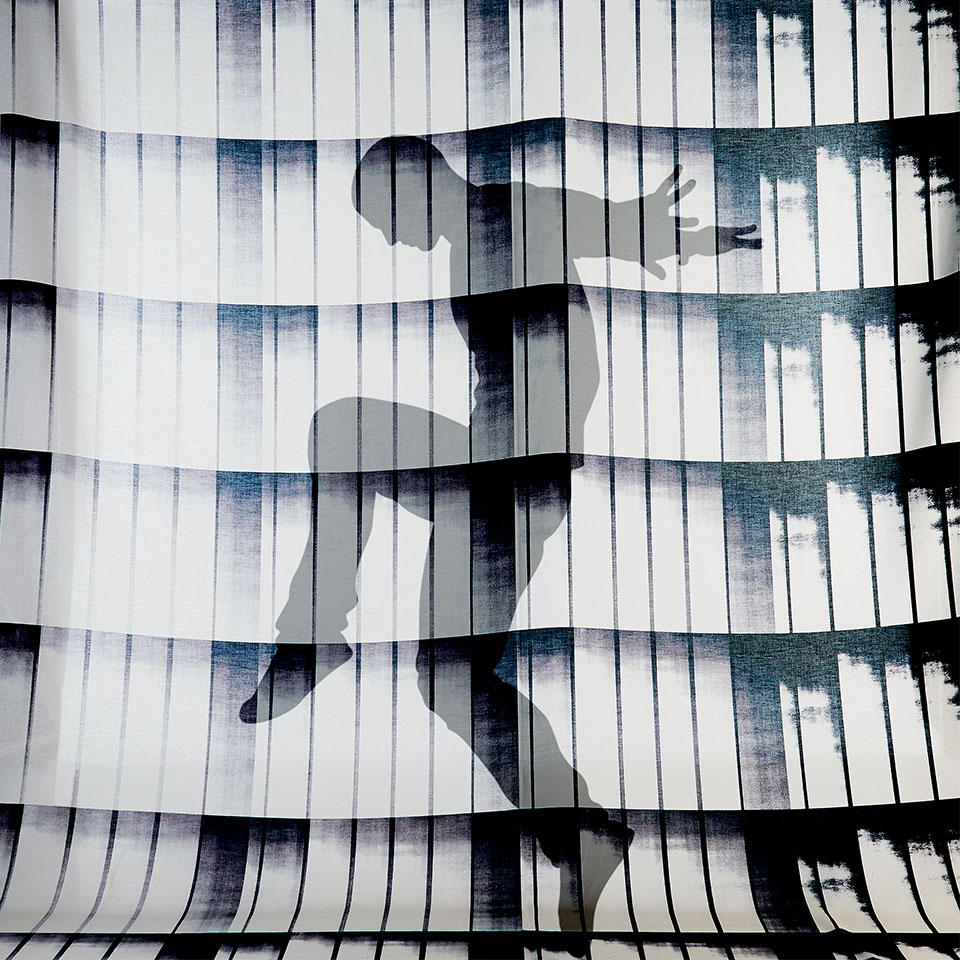 HEPBURN by BRAD ASCALON for NUDE

A self-confessed tribute to the reigning trend of mixology, the art of inventing cocktails. The new home version of the professional kits we see tossed around behind the counters of cocktail bars more than holds its own. In fact, the collection sports glass and brass in a delicate archipelago of form and function. It includes shakers, mixing and serving glasses, all elegant, fun pieces but also convenient and easy to handle, even for those who enjoy mixing in the comfort of their own kitchen, surrounded by a handful of friends. The name chosen takes us back to the elegance of the immortal Audrey Hepburn, the British actress who starred in ‘Roman Holiday’, ‘Breakfast at Tiffany's’ and ‘Charade’. She was the source of inspiration for the American designer Brad Ascalon, who lives and works in New York. — nudeglass.com 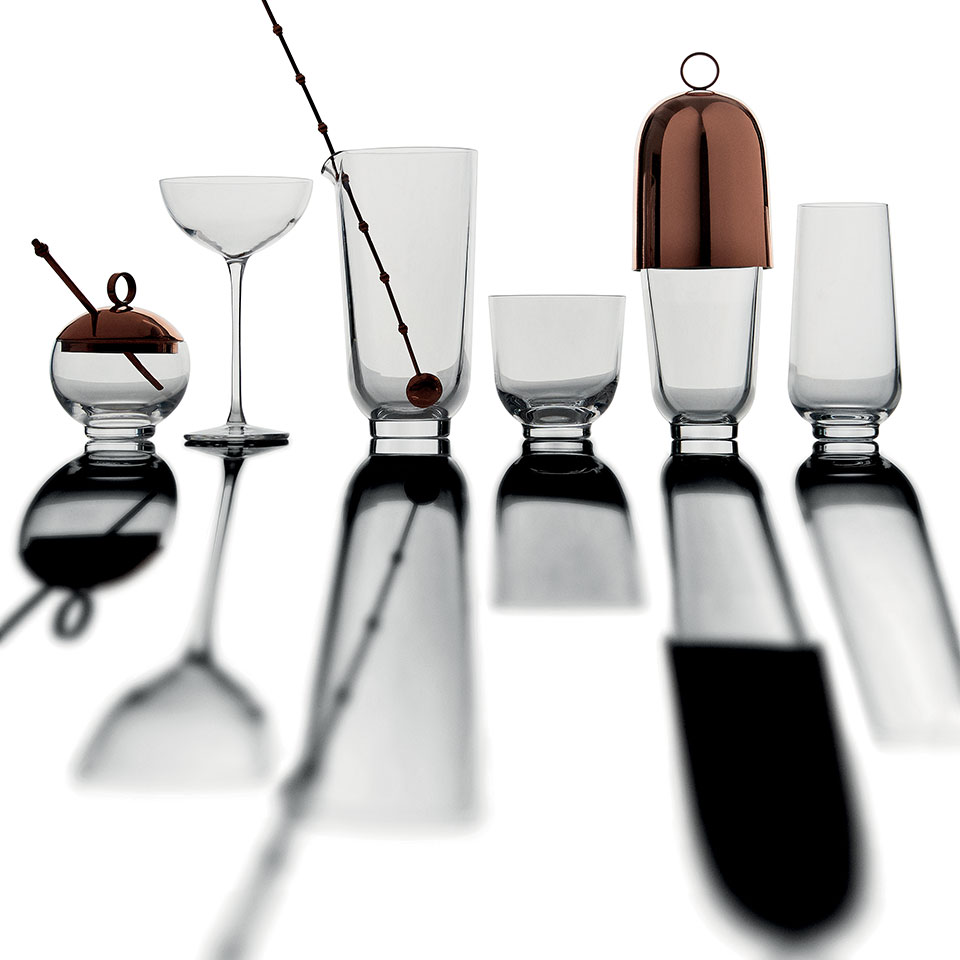 CONVIVIUM by ANTONIO CITTERIO FOR ARCLINEA

When socializing extends to include preparing food to favor the interweaving of relationships, this is when innovation makes its appearance. Over time, the island — a worktop made of Calacatta marble and Era built-in wooden table with solid wood details —has become a cult piece dedicated to the rituals practiced in the kitchen environment. The design by the Milanese architect was created in 2002, and in a span of 15 years, it has helped change the way space is used in this part of the home environment. In addition to the closet architectural volume, clad in wooden panelling, with modus folding door and fine bronze PVD finish, the design is now enhanced by new elements: stainless steel channel in the centre with storage compartments and accessories, hob with cast iron grills, wooden cutting boards and sliding grills in PaperStone (product made using paper recycling processes), along the length of the basin. — arclinea.com 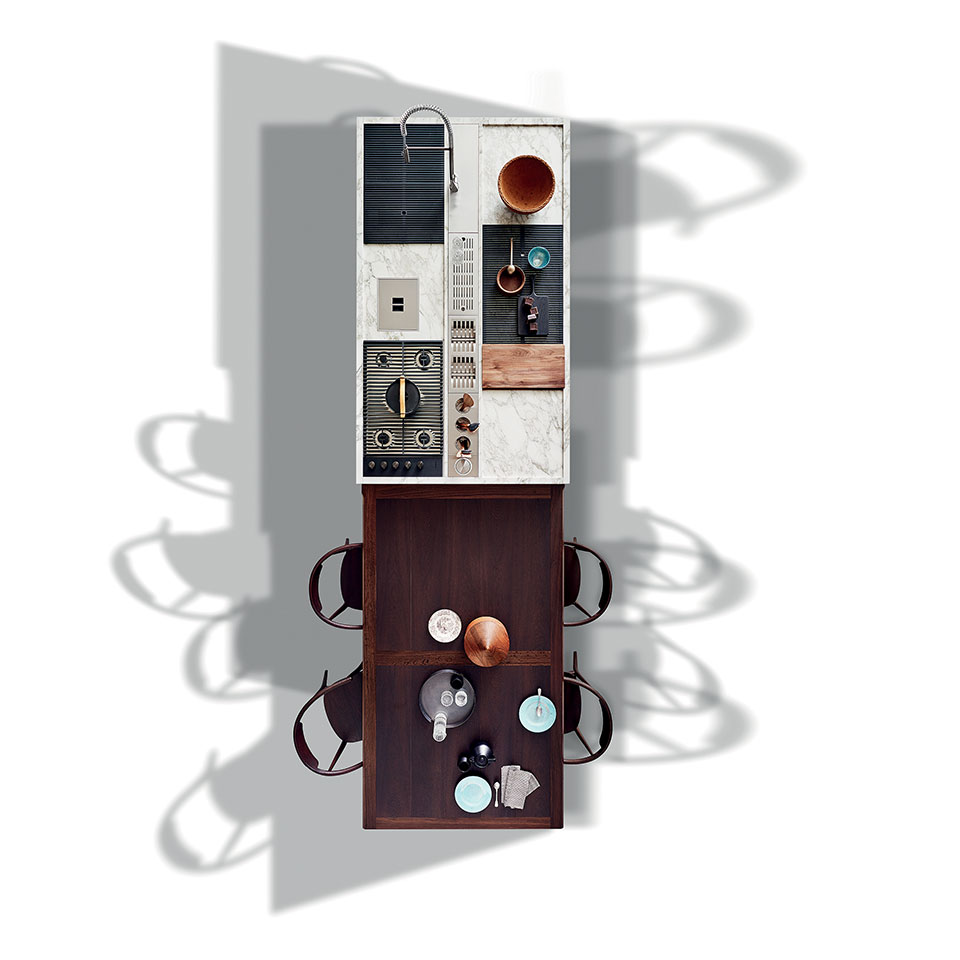 SUPER ROUND by BETHAN LAURA WOOD for CC-TAPIS

The entire collection of Super Fake rugs plays around with the hyper and super effects required due to the speed of communication in the world of social media. Or in other words, the lengths to which people will go to grab the attention of digital followers. The designs, inspired by rock formations, combine psychedelic colors to portray organic layers and sediments. The beauty achieved using sophisticated processing techniques handed down through the generations by Tibetan craftsmen to recreate the complexity of ancient geological eras is simply fascinating. Wood uses rocks to invite reflection on just how frequently images enter our daily lives. Chromatic dynamism and attention to detail are a good way of retaining them. The world of dreams is the right dimension. — cc-tapis.com 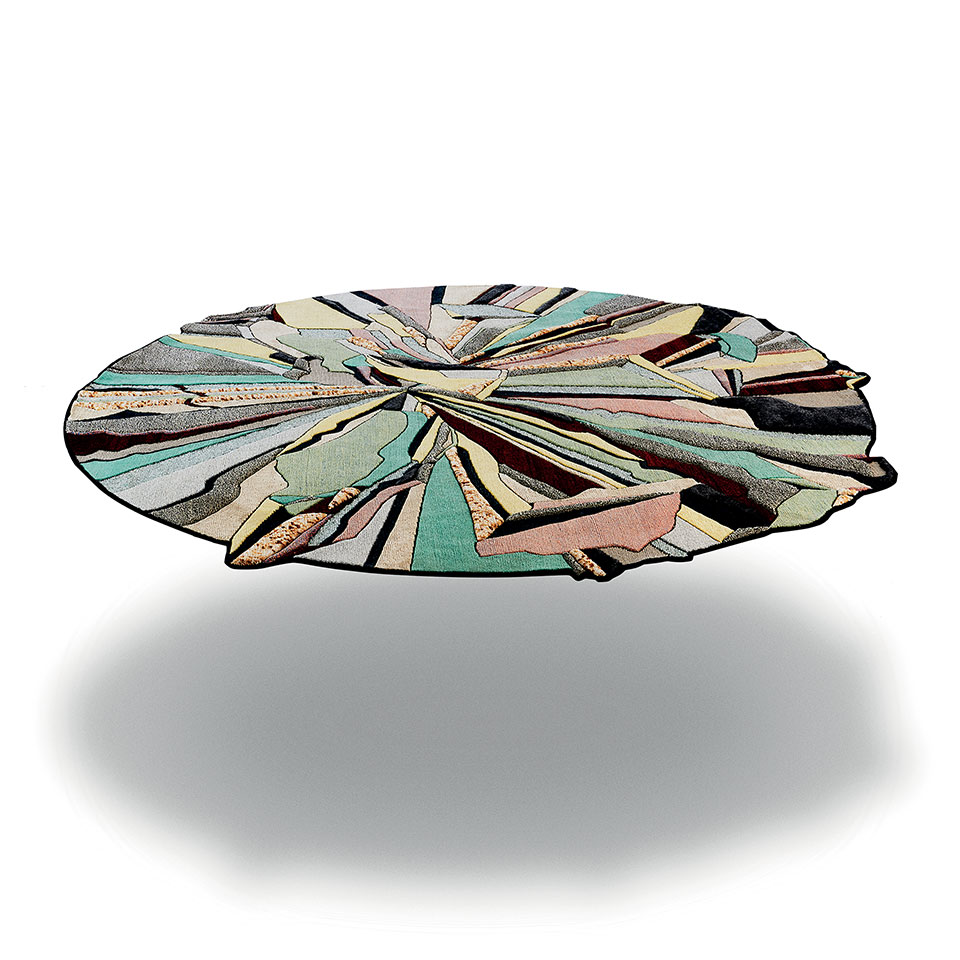 A tribute to the celestial vault and the starry universe provide the inspiration for the work of the English product and interior designer who won the award for the tableware category last year and has now won the one for the best light. A child prodigy of the British design scene, he has conquered the world of the millennials. We can say that his time spent at drama school, passion for fashion and friendship with Vivienne Westwood have made him into a creative mind with a characteristic, eclectic soul that he cultivated at Central Saint Martins, the school where he studied. The design revolves around the theme of the intersection of two chrome-covered steel and opalescent glass discs. Linked as if in a chain, the two elements of pure geometric form playfully interact with the expressive strength of the reflective surfaces: by mirroring one another, they present all the magic of a bright jewel. — leebroom.com 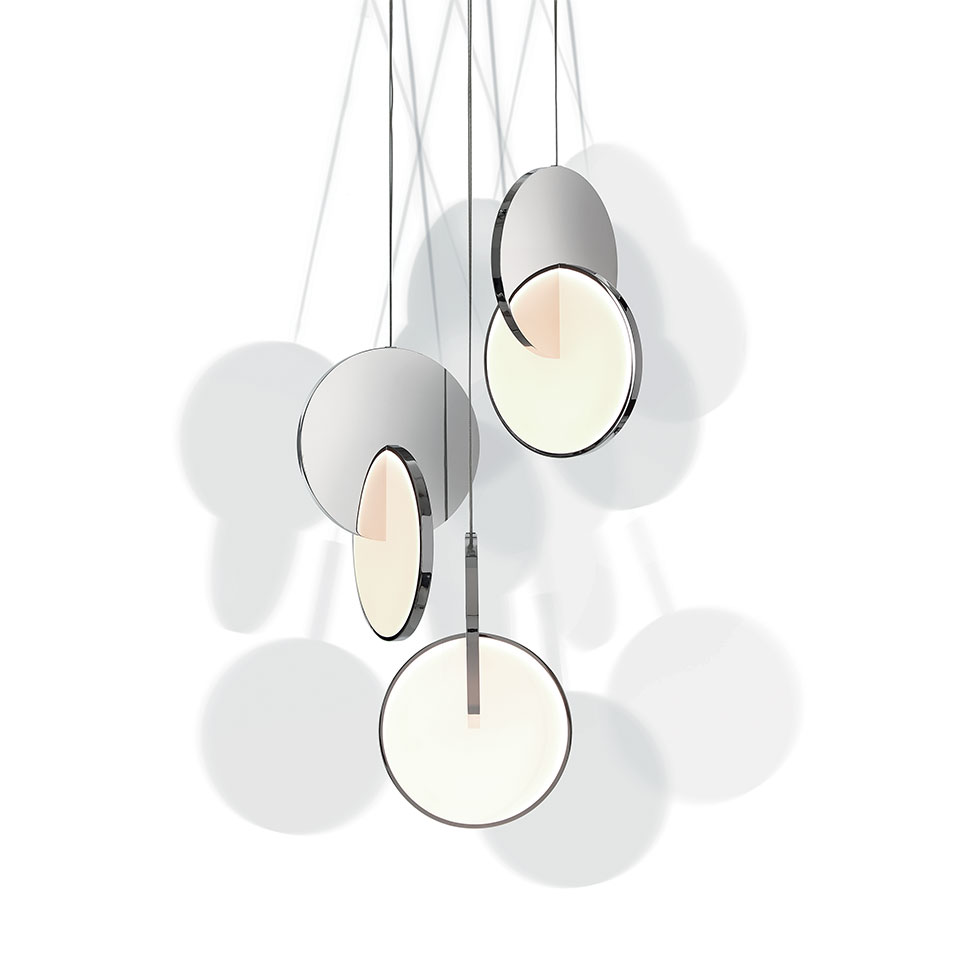 Forms and surfaces to recreate the atmospheres of the artificial grottoes of 19th-century gardens: this was Italian designer Cristina Celestino’s source of inspiration. Terracotta is the ideal element for reproducing limey sediments and shells to recreate immersive visual and tactile effects. Introducing Rocaille, a mosaic of concave and convex lost fossils, and Nifeo, reminiscent of a rusticated surface: the holes become regular and the result is a rich, three-dimensional, textured tile. Delizie is a design based on the playful rhythmic repetition of free, precious silhouettes. — fornacebrioni.it 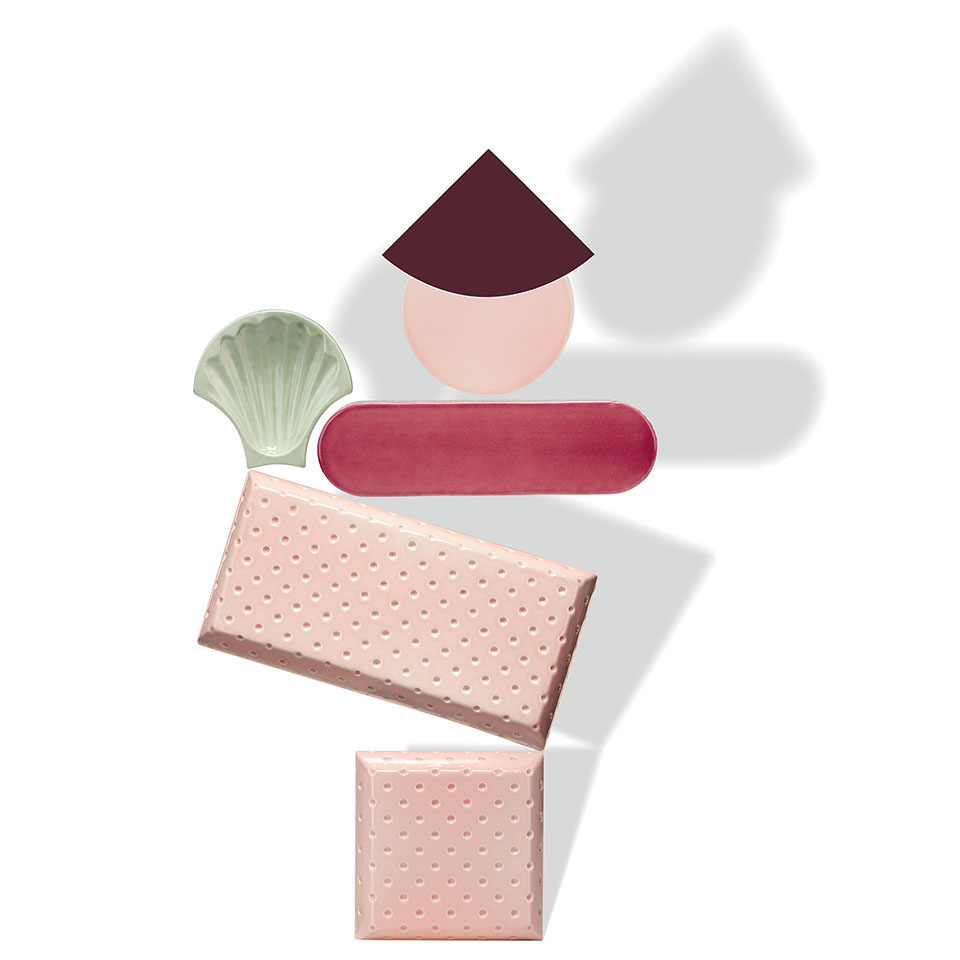 Yet another ingenious, ultra-simple work by the grand master of democratic design, created for the poster company of fine Italian quality that has always focused on products that are accessible to everyone. Starck’s design for Kartell is a tribute to the vintage seaside style reinterpreted with a pop vibe: lightweight, stackable directors’ chairs and sun loungers with a headrest, flaunt the universal shape of the poolside furniture. A “less is more” effect that strips the frames of the superfluous to reveal the beauty of simplicity. The maxi stripes, patterns and shades of the Baywatch armchair complete the masterpiece. — kartell.com 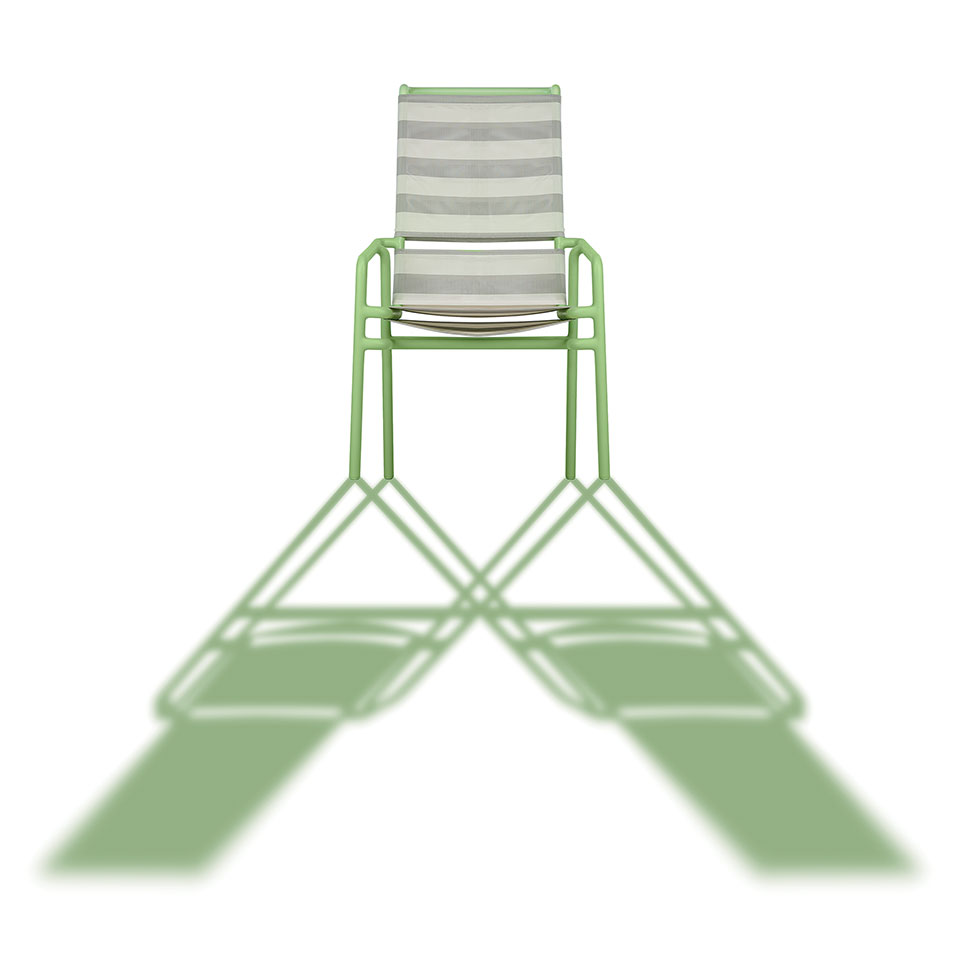 BIARRITZ by SAMUEL ACCOCEBERRY for FLEXFORM

Intersecting volumes, inverted proportions, precious, but imperceptible details. The bed by the French designer is an architectural element in which the huge upholstered headboard takes center stage. The generous dimensions of the shapes are part of a design solution chosen to build a warm and protective sense of intimacy around the sleeping area. The materials confirm and enhance this: leather and fabric are used for the coverings and dark metal patterns accentuate the wavy effect, all telling a story that assigns a leading role to the tactile aspect. Finely tailored stitching, artisanal sophistication, and the meticulous care and attention paid to the forms make this bed an oasis for quiet slumber. — flexform.it 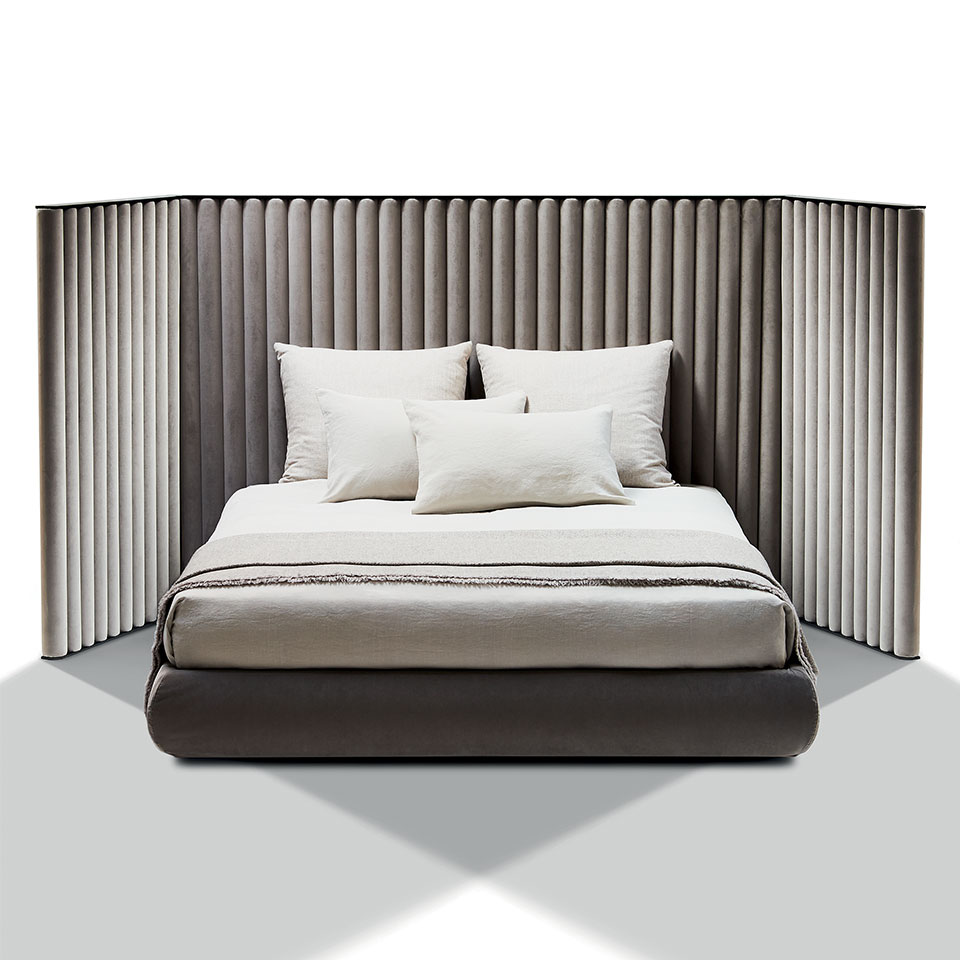 Watercandy re-invents the hand shower. But that’s not all: it also introduces a new way of experiencing water: ‘water-à-porter’ is much more than a copy, it’s a unique, tailored experience. The soft strap chosen by Ludovica and Roberto Palomba is a precious detail and functional feature that allows the user to grip it easily and so freely to enjoy the benefits of its massaging action. Almost a natural extension of the hand, it allows the water to dance in the space and follow the lines of the body until it completely disappears when the nozzles come into direct contact with the skin. A jewel that is easy to wear, favoring relaxation and at the same time stimulating the reawakening of the vital energies. It is Round, ergonomic and sensual. --- zucchettikos.it 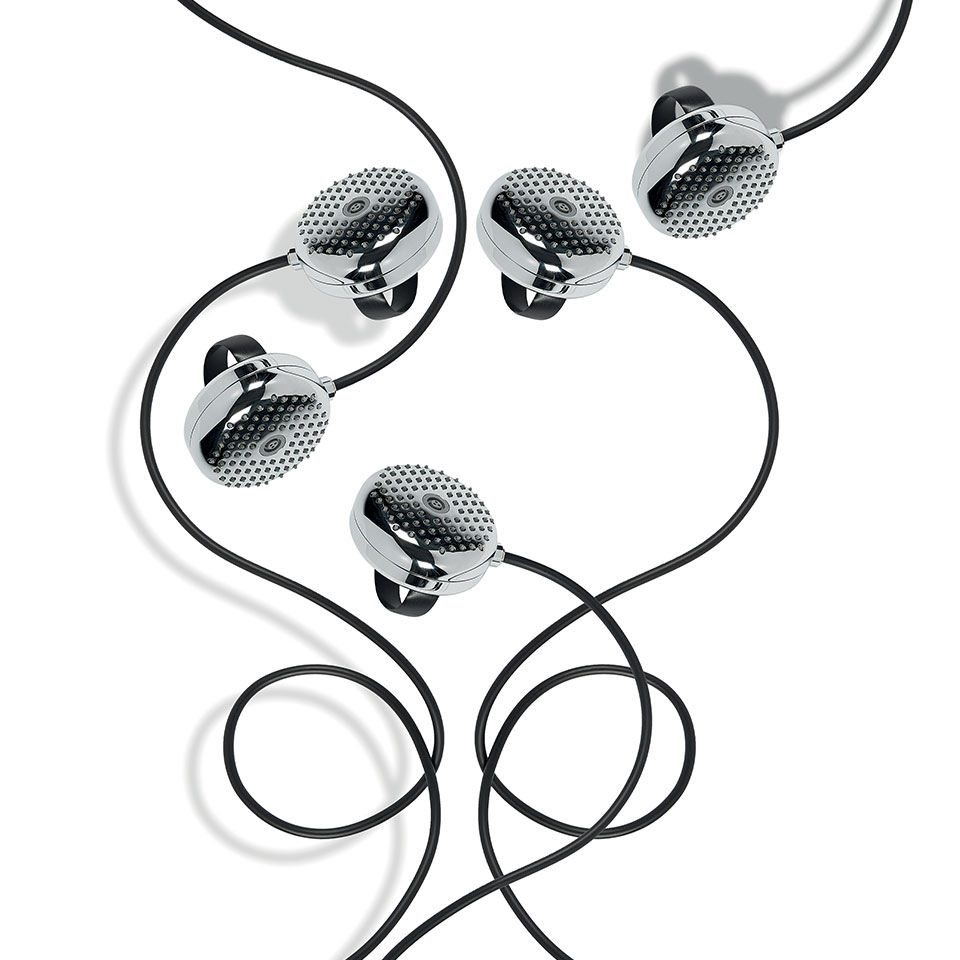 Look out for the EDIDA winners who will be published in the April-May issues of ELLE Decoration worldwide.

INTERIOR DESIGNER OF THE YEAR - INDIA MAHDAVI
ELLE DECOR AT WORK: THE EVOLUTION OF WORKSPACE