Ana Moussinet always knew she would do something related to architecture. “It was a given”, she claims. “I always had a sensibility for interiors and volumes”. She was born in Belgrade in 1973 into an almost obsessively artistic family. Her father is a painter, her mother a decorator and one grandfather an architect. As if that were not enough, her grand-uncle Vojo Stanic is a painter who represented Montenegro at the 1997 Venice Biennale. From an early age, Ana would accompany her parents to drawing classes. “They were almost like a day nursery for me”, she recounts. “It really formed my eye”.

She still talks about the importance of a line or a stroke. “It can say a lot of things, the way it’s drawn, the form it takes, the intensity it expresses”, she asserts. In her work as an interior designer, lines are certainly very present. Elements are often framed by them, surfaces are decorated with vertical bands and spaces divided by curves and counter-curves. One of her aesthetic references is Rem Koolhaas’s gilded Prada Foundation in Milan and another constant to Moussinet’s designs is the presence of gold accents. “For me, they’re a way of enhancing the story I’m trying to tell”, she says. She likes to play with mirrors too. “They prolong your gaze and are a good way of creating both rhythm and surprises”, she explains, adding that it’s no coincidence that the first object she’s had produced is her Good Vibes mirror, manufactured by the French brand Ligne Roset.

Moussinet left her native Serbia while still a teenager to attend high school in Boston and went on to study architecture at Paris’s School of Fine Arts. It was in 2009 that she collaborated on her first hotel project—the Sofitel Jardin des Roses in Rabat, Morocco—in tandem with one of France’s most respected designers, Didier Gomez. Since, she has gone on to decorate two other establishments by herself, both for MGallery Hotel Collection—the Hotel de Paris in Odessa and the Century Old Town in Prague. The latter is located in an ornate 19th-century building, which once housed the headquarters of a Bohemian insurance firm, where Franz Kafka worked from 1908 to 1922. A bust of the writer greets guests in the lobby and his former office has been transformed into a signature suite. Throughout, Moussinet attempted to integrate local influences and mentions how the patterns on the hallway carpets were inspired by a small dish by Czech designer Jindrich Halabala, which she found in an antique market.

“What I love about working with MGallery is the creative freedom you’re given and the fact that there’s always a narrative to each project”.

“What I love about working with MGallery is the creative freedom you’re given and the fact that there’s always a narrative to each project”, she asserts. She is currently working on a new hotel for the brand in Dubai, where the storyline is encapsulated by the phrase: “The captivating breeze of charming elegance in the heart of the cosmopolitan gem”. Due to open in 2022, it will feature rooms inspired by the desert—expect sweeping dune-like architectural forms, rich ochre tones and carpets decorated with what look like footsteps left in the sand. The lobby, meanwhile, will aim to turn hotel codes on their head. Traditional reception desks will be banished and a multi-functional area created, which will feature a café, a retail display and a meteorite-like structure clad in mirror. “The idea will be for people to live different experiences”, she explains.

Also currently on the drawing board are the communal spaces of two prestigious new office buildings in Paris—restaurants, lounges, gyms, auditoriums and the like. And while Moussinet is intent on keeping her office relatively small, there is one other collaboration she would definitely consider. Her husband Emmanuel has just set up his own architectural firm. “We’ve never worked together so far”, she recounts”, but who knows? We met as students when I was starting out. So, it would be a way of bringing things full circle”.

RENDERING OF THE FUTURE MGALLERY HOTEL COLLECTION HOTEL IN DUBAI, DUE FOR 2022. 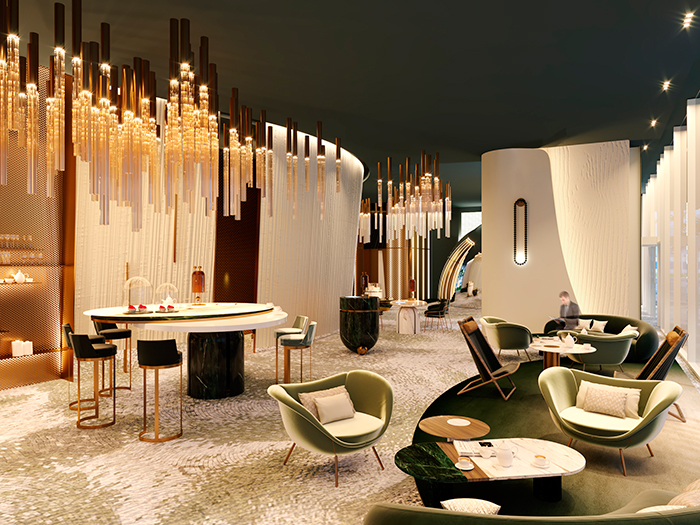 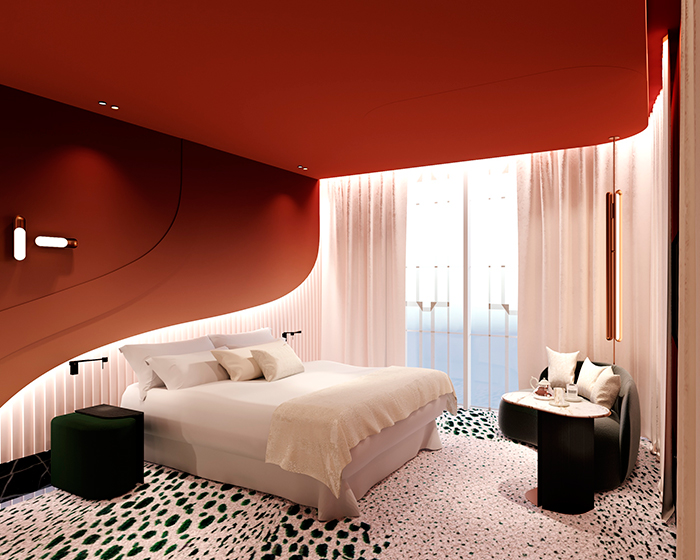 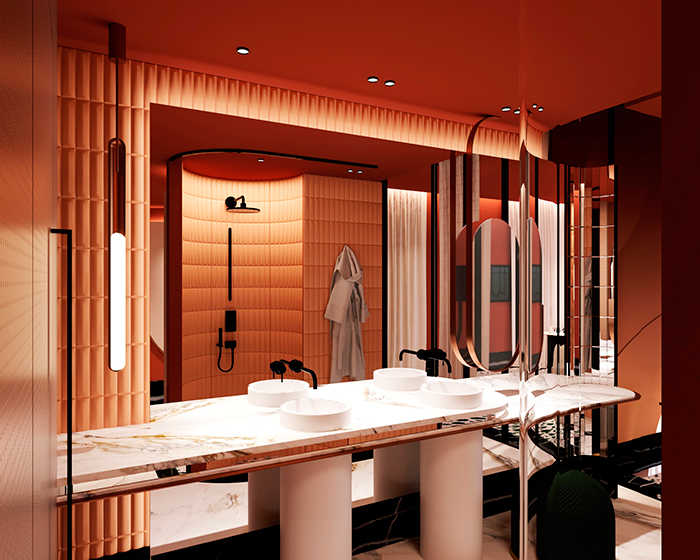